Leading High Performance Teams – Do You Understand Them? 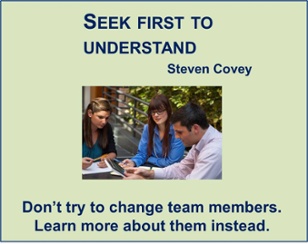 It was an interesting question. I was enjoying breakfast with my National Speakers Association Chapter and the subject turned to team dynamics and the best ways to understand the various types of people in a group. Of course, I couldn’t miss the opportunity to explain the Energize2Lead Profile™ which I use in leadership development programs. That’s when Jill asked the question: Does the profile help people change to make the group better?

It’s a logical question, especially given the emphasis that some popular personality profiles place on change, but it’s the wrong question and a great illustration came to mind. Years ago I worked for a boss who was my polar opposite. I didn’t have the MyHardWired™ profile in those days so I couldn’t see our differences in living color, but there were obvious differences.

Over a period of about 2 years our relationship deteriorated significantly, but the final straw came when he blamed my people, and me personally, for an equipment failure. I felt his anger was unfair and misplaced. The situation became so toxic that we were not even speaking to one another. The situation was damaging to both of our leadership positions. From my point of view he was a poor leader, unable to recognize his own weaknesses. From his point of view I’m sure I was insufferable and difficult. Yes, I would have liked to change him – preferably into something non-human – and I’m sure he would have like to change me as well.

But that wasn’t the answer. Unfortunately, the idea of changing people, or yourself, in order to meet someone else’s expectations has become a rather common theme. While I’m not suggesting we should not strive for personal improvement, it is very difficult to change someone’s basic personality style; what the profile calls their Instinctive Needs.

Instead of changing, try understanding. It’s much more effective. Observe how others communicate and what talents they seem to have. Notice where there are differences. You’ll begin to see more effective ways to work together. Understanding doesn’t mean you have to become fast friends, or even like each other much. What it does mean is you will be able to work more effectively with them.

I’ve worked for some pretty amazing leaders though the years and when I found myself with a leader who had none of their skills, I did not know how to deal with the situation. I wanted him to be like the others, but that wasn’t going to happen. What I should have done was try harder to understand him. Should he have understood me better? Maybe so, but remember, understanding begins with you, not the other person.

When team members understand each other, the team is more effective – and no one has to change. 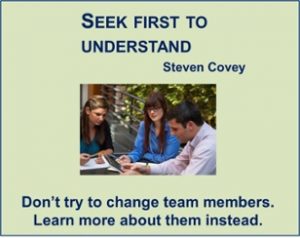