Three Secrets to Being an Influential Leader 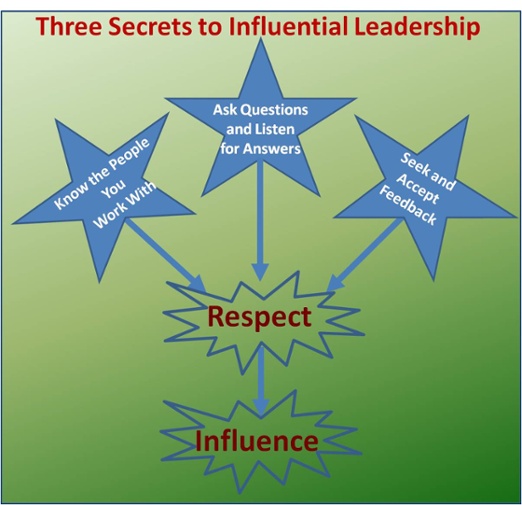 Influence: the ability to affect the behavior of others. Is influence one of your leadership skills?

With the trend toward virtual teams and matrixed organizations, leaders often find themselves in a position where they don’t feel they have real authority. Years ago I was in a leadership position in which I was responsible for supporting many other organizations across the country. My team was also expected to enforce certain standards and requirements. What made the job especially challenging was that the position came with no real authority. None of the organizations reported to me and I had very little ability to cause them to do anything they didn’t want to do. How was this going to work?

This is where I learned the true value of influence. I quickly learned that, although I was responsible for compliance, I would be much more successful if I concentrated on supporting those other organizations instead of concentrating on holding them accountable. Their success was my success and they wanted to be successful just as much as I did. When I gained their respect I could influence outcomes in ways that raw authority would never have achieved. As I moved on to other teams and organizations I found that even when I did have the authority, I could get more done by working with people to influence outcomes rather than trying to boss them around.

Experience has proven that influence results when others gain respect for you. Here are three actions that leaders can take that will earn respect and gain influence.

1. Get to know the people you work with. This doesn’t require a detailed biographical sketch and dinner with their family. What’s important is to gain an understanding of that person’s strengths and how they are most comfortable interacting with others. Learning these two aspects will go a long way toward gaining respect and developing influence.

2. Ask questions and listen for the answers. I learned long ago that I am never the smartest person in the room. Even if you think you might be, embrace humility. When leaders believe they are the smartest person, they lose respect and therefore, influence. Asking questions allows others to express themselves and, just as importantly, listening lets them know the leader values their knowledge and opinions. If you ask questions and don’t genuinely listen for the answers, you’ll lose respect and influence.

3. Genuinely seek and accept feedback. I’ve known many leaders who feel that seeking feedback diminishes their standing. Quite the opposite, when others know you are willing to hear their complaints, suggestions, or even criticisms, their level of respect almost always increases.

Embrace these three techniques. You will be more successful when you establish respect and influence outcomes rather than giving orders. 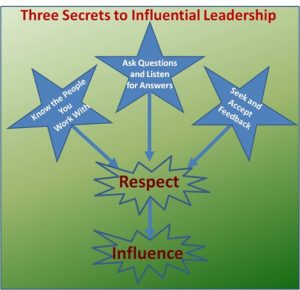