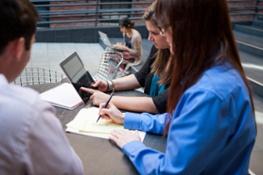 The “I am in charge and you must do what I say…or else” approach is the fallback position for many leaders. It seems like the easiest way to get things done and resolve conflict. But, would a collaborative leadership style rather than overt authority make a leader more successful? Midway through my Air Force career I had an assignment that clearly demonstrated how a collaborative leadership style could be effective.

I was assigned to the Air National Guard Headquarters. Up to that point I had been in the active duty Air Force where there is usually no question about who has authority. The National Guard is a complex organization and I quickly learned the various units I was tasked to support reported to their state governors with no line of authority from us to them. I was supposed to support them, ensure their compliance, and occasionally ask them to perform missions, yet I had no actual authority to make them do anything.

It was a little confusing.

Of course a situation like that is ripe for conflict and it didn’t take long for the first one to emerge. I needed a particular Guard unit to bring their operation into compliance with explosive safety requirements. They were less than enthusiastic and quickly let me know how they felt. They clearly explained that their chain of command did not include me.

Conflict! This was going to be a very long assignment.

I sought my boss’ counsel. He had worked at this headquarters for a few years and explained that Guard units saw us as a support organization at best. While there were ways to attempt to force a unit into compliance, doing that would likely create other problems and personal animosity, with no guarantee of success. He pointed out that collaborating on a solution was often more effective than simply issuing orders. He suggested I go to the unit, try to understand their issues, and ask how I could help.

I did that and quickly came to understand how effective a collaborative leadership style could be. It wasn’t that the unit didn’t want to comply, but that local constraints made compliance very difficult. They didn’t need direction, they needed help. It took quite some time, but working together, we were able to solve the problem. I worked in that position with responsibility but very little authority for three years and during that time I encountered many similar issues. I learned how and effective leader can use a collaborative leadership style rather than overt authority.

When I was transferred back to a more traditional position, I found myself leading a large organization with a wide range of responsibilities. I now had authority but discovered I didn’t need to rely on it. Instead, when conflict arose, striving to understand the issues instead of taking the easy path of issuing directives allowed me to help build a culture of collaboration.