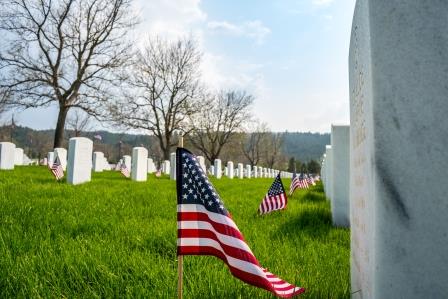 This past week I was visiting my mother in central Illinois.  While we were there, my wife and I drove Mom out to the cemetery to plant fresh flowers on Dad’s grave. Dad has been gone now for several years but not so long that the grave doesn’t seem new whenever I stop by. At the foot of the grave is an extra marker indicating Dad served in the U.S. Army during the Korean War.  Dad got out of the Army afterwards and lived a long and full life. Not far from Dad (literally next door in cemetery terms) lies my Uncle Arnold.  Arnie served as a Marine in World War II in the Pacific theater.  Arnie made it home as well, but with scars from wounds received in the bitter island fighting of that war.  Like so many of his generation, he got on with life, working and raising a family.

To many, Memorial Day weekend has become just that long weekend marking the start of summer.  I’ve been as guilty as any of thinking more about the barbecue menu than what the day stands for.  You see, Dad and Uncle Arnold were among the lucky ones who returned from war and from service to their country to go on with their lives, have careers, kids, grandkids, great-grandkids and to enjoy retirement. In time, both have since joined their comrades-in-arms who weren’t so lucky.  In the two conflicts in which these two men served, we lost nearly 450,000 Americans. Since then, America has given up 65,000 more in conflicts ranging from the jungles of Vietnam to the desert sands of the Middle East to the mountains of Afghanistan. Since World War I, the “war to end all wars”, more than a half million brave souls have laid down their future lives of friends, family, and, yes, even backyard barbecues for the sake of others. Please pause for a few moments this weekend and take time to remember those who paid the ultimate sacrifice in service to their country.

Have a very blessed Memorial Day.