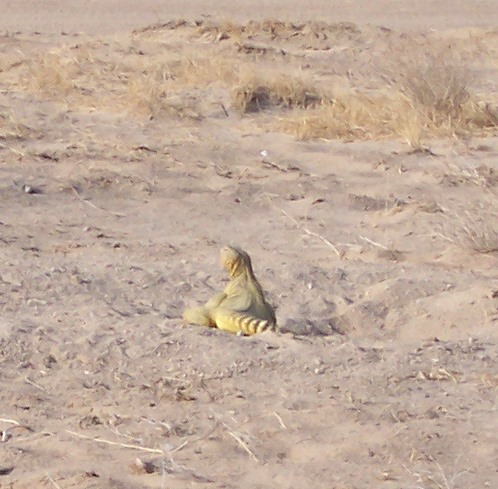 The meeting had not gone well. In fact it had become quite heated. Among other issues, my boss, was upset that my squadron did not participate in base recreational activities very often. I explained that my mechanics worked 12 or more hours a day, 6 or 7 days a week and that when they weren’t working, they were probably sleeping. We were in an austere location in a very real conflict. Sometimes it seemed our leadership forgot that.

As I stepped outside I decided to walk out to the line where the aircraft were parked. It always reenergized me to talk to the maintainers. As I started out, I noticed several people gathered around one of our line trucks in a dirt area off one of the parking ramps. What was that? One was digging? I had to check this out.

As I got closer I saw that in fact, one of them was digging.

A dhub dhub is an odd looking creature that can be found in parts of the Middle East. Full grown they are about 2 – 3 feet long and look like a prehistoric cross between an alligator and a lizard with the beak of a snapping turtle. They aren’t particularly friendly, but aren’t aggressive either. They burrow into the ground and are content to just be left alone.

Apparently, unknown to me, several of the guys had found one of these dhub dhubs near the parking ramp and had adopted it. Whether it was a him or her was just speculation. They would catch Ralph, put him in the truck and feed him sandwiches from the chow hall. Apparently Ralph liked the sandwiches.
The aircraft parking ramp was made up of separate patches of pavement connected by taxiways. We had been notified a project to pave more of the dirt area was to finally begin. Part of that new pavement would cover the entrance to Ralph’s home and the guys were concerned. They were digging to find Ralph and move him to a new home.

I had to hold myself back as I experience conflicting emotions. A part of me found this situation quite humorous and a good example that moral was high and I didn’t want to damage that. Another part of me was a little upset at the whole situation. These guys were expending a lot of energy that should be used to keep airplanes flying. Of course there was also the issue of chow hall food being fed to a lizard.
But, I’m human and so what really bothered me was that I had just spent a lot of emotional energy telling the colonel that these guys were constantly tired and didn’t want to do much but work, eat, and sleep. Yet here they were digging in the dirt to find a lizard they had name Ralph.

I asked them to stop digging and explained about my conversation with the colonel. I also suggested that Ralph probably had another way out and could likely take care of himself.

I don’t know what happened to Ralph. I suspect the search did not end that day, but I never heard of it again.

Leaders will never know everything their teams do or think. That’s not all bad and had it not been for the earlier conversation with my boss, I probably would not have even known about Ralph. That’s okay. Ralph was an example of how high functioning, engaged teams will find ways to have a good time, even when the job is difficult or even uncomfortable.

This story illustrates another aspect of leadership. I was concerned that my boss might see this activity and use it to prove that I was wrong. I need not have worried. The colonel could not be troubled to actually come out to the flight line and see what was really going on.

It’s normal for leaders to have blind spots, but a good way to minimize that problem is to actually get out and see what your teams are doing.