Home » Blog » How to Create a Motivational Environment in a Union Shop: It’s Not as Hard as it Sounds

How to Create a Motivational Environment in a Union Shop: It’s Not as Hard as it Sounds 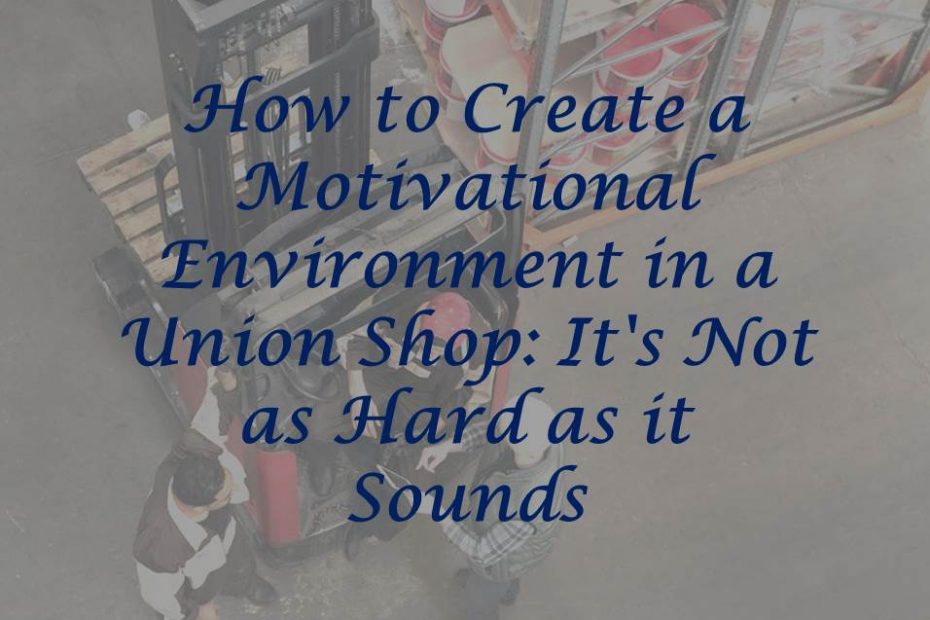 “How do I provide a motivational climate when all my workers are in unions and they care more about union membership?”

This question is common in leadership development workshops. It’s one of the biggest frustrations leaders have with a union shop. “I’m going to file a grievance” are words that can strike terror in even the strongest leader.

The first time I heard these words, I didn’t know what I was supposed to do. New to the job, I hadn’t worked with unions before and had no training in union relations. I innocently asked, “What’s the problem?” The unhappy worker was considerably older than me and she had been in the organization a long time. She was surprised I asked that and, after a short silence, proceeded to tell me how the grievance process was supposed to work. Being stubborn, I said it would be easier if she would just tell me what the problem was and give me a chance to fix it. After a little more back and forth discussion she blurted out the issue, which happened to have a very easy fix. I made it clear that we had a job to do and her shop was critical to that job. I told her I would do my best to take care of issues that made it difficult for them to be successful. From that point forward we had a good relationship and no more threats of grievances.

There are three steps you can take as a leader to create a more motivational climate in union shops. But always remember: your responsibility is to develop a motivational climate resulting in a better team. An adversarial attitude or attempts at union-busting will not help.
1. Always remember your workers are human, and humans want to belong to something. Belonging to the union is one way to fill that need. Better teams develop when leaders provide something else team members want to belong to. Seems easy; they already belong to a team or workgroup. But just belonging is only the first step.

2. Not only do people want to belong to something, they want to feel they are a valuable part of the group. The best motivational climate develops when each worker understands they are more than just a member of the team. They are important; their contribution is valuable; and you, the leader appreciate that value and their importance to the team.

3. These two steps require that every single person on the team understands what the team’s mission or purpose is and how they are vital to accomplishing that mission or purpose. Workers will be most engaged in organizations that give them a reason to be engaged.

These three steps will help your team put away the union cards and become a genuinely high performing team.

To see videos of this and other tips, go to Bob’s YouTube channel.

1 thought on “How to Create a Motivational Environment in a Union Shop: It’s Not as Hard as it Sounds”