Home » Blog » Leadership Development – The Difference Between Fair and Equal

Leadership Development – The Difference Between Fair and Equal 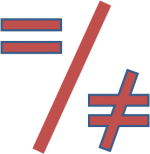 Are you treating all your employees in a fair and equal manner? Those two words are often considered synonymous; Roget’s Thesaurus even lists equal as a synonym for fair, but understanding them as very different concepts is a critical leadership skill to embrace in your leadership development. I often write about creating a motivational environment, and that will not happen if you treat fair and equal as synonymous.

Suppose you have two employees, Jack and Jill. Jack has been with the company for 18 months while Jill was hired a year ago. You’ve ensured that Jack and Jill both have everything they need to do their jobs. They are both held to the same standards and have been provided the same instructions and policies when they were hired. Also, both have been given opportunities to lead similar small teams. You have ensured that each started with equal opportunity.

Jill has really excelled. She puts in the extra effort to produce extremely high quality results. Her team leadership is very effective and has resulted in resolution of several problems that had been hampering the company.

Jack on the other hand has been content with a mediocre performance. He’s made it very clear that he understands his job description and will follow it to the letter, but no more. His team leadership is laissez faire at best and sometimes almost toxic. He accomplishes what he is tasked to do and nothing more. His work never seems to go beyond the minimum standards.

Business has been good this year and the company has had a significant revenue increase. You’ve decided to use some of that bounty for employee bonuses. If you want to treat Jack and Jill equally, you’ll give them both an equal share of the bonus.

In both cases, equal is decidedly unfair. It is unfair that Jack should receive an equal share of the bonus that was largely earned by Jill’s, and her team’s, harder and more effective work. Likewise, the server who provides minimum service will share in the greater tips brought in by the server who is harder working, more diligent, and more professional.

Remember the difference between fair and equal. Giving each employee equal opportunity is certainly fair. Each person in the organization must have the same opportunity to succeed. Treating them as if they each produce at an equal rate is not fair to those who work hard and strive to excel. In fact, doing so can actually be a disincentive and can destroy employee engagement for those who have worked hard and brought the company success.