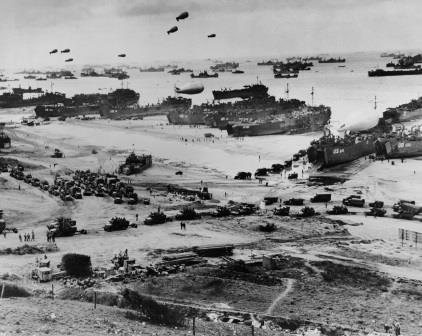 June 6, 1944. The skies over the English Channel were cloudy and the water cold and rough as more than 156,000 American, British, and Canadian soldiers climbed down from their ships and into the landing craft that would take them to the beaches of Normandy to liberate Europe. It was to be a very difficult day.

The mission was accomplished at a terrible cost and many stories of great leadership and heroism come from that day. Lieutenant General Omar Bradly watched the scene from his command ship, the Augusta. In his book, A General’s Life, General Bradly mentions that the carnage was so bad on Omaha Beach, he considered abandoning that part of the mission; however, the mission had to be accomplished and to quit would be to waste the lives already lost.

Back in England, at the allied command headquarters, General Dwight Eisenhower, supreme commander of the Allied Forces had written a letter, claiming complete responsibility for the failure of the invasion. Fortunately he never had to send that letter.

The famous “D-Day” invasion of France during World War II provides many excellent leadership development lessons, but two stand out.

1. Plan carefully, then let your leaders lead. The invasion of France was a very complex plan with many moving parts. Neither Eisenhower in England, nor Bradly aboard the Augusta, could direct each unit; the area was too large and communication too unreliable. They were forced to rely on their subordinate leaders. Once the mission started, it was those leaders who carried the day.

2. Even though they can’t control everything, leaders still have overall responsibility. Eisenhower understood this. Had the invasion failed, he was prepared to take full responsibility. It would have been easy to blame failure on his subordinate leaders, or the weather, or any other factor he could think of. But, that’s not what good leaders do.

As a leader, you will face difficult challenges and have to make tough decisions. No matter how difficult your task is, you can take heart knowing you will never have to make a decision like Bradly did on June 6, 1944. Plan well, train your leaders to lead, and you will have success.