Leadership Tips – The Courage to Coach 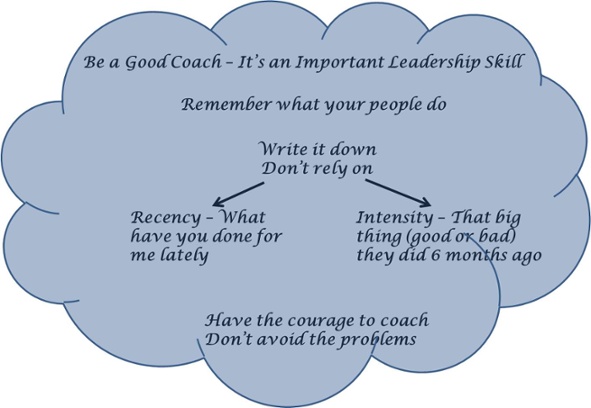 Jill[*] was a little depressed when I spoke with her. She had just started a new job and should have been happy. She wasn’t. A little probing revealed that her previous supervisor, Jack, had made some negative, and completely unexpected, comments in her final performance report. Apparently, Jack didn’t like the way Jill communicated, saying she was too direct and somewhat abrasive. Jill was especially troubled because she thought that while her direct approach sometimes made Jack uncomfortable, it was what he wanted.

How could this have happened?

There are two factors at play here. The first is a natural tendency to avoid conflict. Jill was very direct in her communication with others which Jack found threatening because he is not as likely to be as direct. Because he didn’t have effective coaching skills, he didn’t know how to approach the issue and his dislike of Jill’s approach festered. Finally, when she left his department, he had a chance to say in writing what he never quite had the courage to say to her directly.

While Jack is largely at fault here, he doesn’t own all the blame. Jill, who wasn’t new to the company and had her own leadership responsibility, did not pick up on what she now could see as hints that Jack was uncomfortable with her direct approach. The experience has helped her understand the importance of getting to know the people she works with and gaining a better understanding of their expectations about how they relate to others.

Related: Getting to know them

The majority of responsibility rests with Jack.

Jack’s inability to express his discomfort with Jill has resulted in a performance report that will haunt Jill for the rest of her career at the company.

There’s another factor that’s common with performance reports and probably applies here as well. They tend to be affected by recency and intensity. Recency simply means we tend to remember the most recent experience. Jill may have done many good things, but if the last conversation bothered Jack, that’s what he’ll remember.

Intensity means we tend to remember what left the greatest impression. Again, Jack’s dislike for Jill’s direct approach overcame his memory of the good she did.

Jack could have overcome both these tendencies with regular, effective coaching. By explaining his dislike of Jill’s approach early in their relationship, he would have given her plenty of opportunity to adjust. By documenting his coaching sessions and keeping track of all his employees accomplishments, he would have been able to write a much more accurate and helpful report.

For her part, Jill has started off well with her new boss. They’ve discussed her approach and now Jill has an action plan to meet the new boss’s expectations.

Do you see yourself on either side of this story? If so, what is your action plan to ensure a happier ending?

[*] The story is real but the names have been changed.